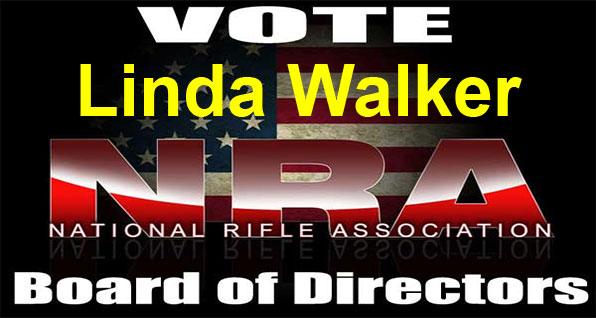 To My Fellow Second Amendment Brothers & Sisters and NRA Members,

My name is LINDA WALKER and I need your vote for the NRA Board of Directors.

If you are a voting member of the National Rifle Association, by now you should have received your ballot for the Board of Directors elections in your February magazine or you will receive it in the mail.

As I come to the end of my first 3-year term as your NRA Board Member, I reflect on how quickly the time has gone by. I have been incredibly honored and humbled to represent our 5 million members. I am very excited in the direction that your NRA is moving. We have record-breaking attendees at the Annual Meetings, NRA News is now the #1 show on Sportsmen's Channel, we have new shows on the Outdoor Channel, NRA has nearly 3 million supporters on social networking and we are bringing in more and more woman and youth as members every day. NRA is stronger than ever!

I've had the privilege of sitting on several committees in my first term. I have been and remain on Grassroots Development, Women’s Policies, State and Local Affairs, and Legislative Policy committees. We are making great strides in activating the grassroots community during elections, we are coming up with new ways to persuade women to become members, and we are fighting back on the legislative level.

As an ardent Second Amendment supporter, I am saddened by the constant attempts to erode our US Constitutional Rights over the years. For too long, anti-gun advocates have played on the fears and ignorance of a gullible public to erase liberty and self-reliance from our national dialog. But I absolutely refuse to let them win this debate.

The recent events at Sandy Hook, Aurora theater, multiple school shootings, and too many more tragedies to list have brought out the worst of the worst anti gunners attacking our Constitutional rights from every direction. We fought back and had a major win in the US Senate last year when eight amendments were defeated and left in a pile of dust.

Bloomberg and his goons have been attacking us at every level. But what he has learned is that his money cannot always buy him the votes. What he doesn't have and what we do have is the ability to put boots on the ground to go head-to-head with him. I experienced this firsthand when I traveled from my home state of Ohio to Colorado this past September. I went there to help with the ground fight to recall two vehemently anti-gun senators. We turned out the people and we won!

For many years now, I have called the Ohio Statehouse my second home as I have personally worked with legislators to protect and advance gun rights. While I have sought no personal gain for my efforts, the National Rifle Association honored me in 2009 with the "Sybil Ludington Women's Freedom Award," the highest honor given to one woman most years for Second Amendment legislation, advocacy, and education.

As a proud NRA certified instructor, I have taught thousands of students in safe, responsible gun handling and concealed carry. I also formerly served as Chairman of our county Friends of the NRA, work as an NRA Election Volunteer Coordinator for the Ohio 12th Congressional District, participate in local politics, and support the Ohio Gun Collectors Association and Ohio Rifle and Pistol Association.

If you help me get re-elected to the NRA Board of Directors, I vow that I will continue to fight the encroachment on the lawful use and ownership of firearms, stop foolish registration schemes, encourage youth and women to participate in hunting and shooting sports, and do everything in my power to prevent the erosion of our God-given rights.

I am neither a celebrity nor a wealthy politician. I am a simple American who has dedicated her life to restoring the hopes and dreams of our Founding Fathers. I have fought in the trenches of legislation, educated citizens in basic self-defense, and tried my best to uphold the values of our Constitution.

I have kept motivated to keep fighting for our rights because of my three grandchildren. I got to grow up at a time when we had freedom in our country. I want the same for them. My three sons have grown up to be true Patriots, with two of them serving in the US Army and the other serving in law enforcement. I hope the influence that my husband and I had with our sons have made them all the freedom fighters that they are today. They keep me motivated to keep in the fight for my family, for my state, for my country, and for you.

If you are a voting member of the NRA, I humbly ask for your faith in me. And I ask for your vote. When you receive the Board of Directors ballot in your NRA publication, please vote for LINDA WALKER.

Thank you and God bless you and our great nation.