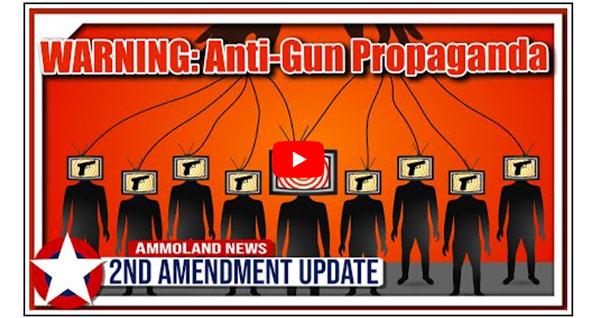 (AmmoLand.com)- The anti-gun lobby loves to believe that their portrayal of gun-related deaths in America pushes the needle toward more support for gun control.

They fail to realize that the more violence is portrayed in the media, the more people seek ways to protect themselves. Some will hide and rarely go out in public, and some will move from high-crime areas to places they believe will be safer, but many will decide to take responsibility for their own safety and become gun owners.

A survey by AP-NORC suggests that 71% of respondents would prefer “stricter gun laws,” but “stricter” is never defined. The problem with this type of poll questioning is that the people responding typically have no idea what gun laws are currently in place, but even worse, they don’t realize that most often, the current gun laws cause higher crime rates. This creates a self-perpetuating cycle of gun restrictions by encouraging continued support of the very thing that causes the problem in the first place.

AP-NORC said, 52% of people agree that it is very important to prevent mass shootings and to ensure people can own guns for personal protection.” This shows us that the number of people who see simply banning guns and doing nothing to improve their level of self-defense as a bad idea is growing. The 2020 Antifa and BLM left-wing riots, supported by Democrats in Congress, helped average citizens see the importance of personal defense. They also made clear who was responsible for the violence. Violence triggers a natural instinct to seek protective measures. During that time, gun sales skyrocketed among first-time purchasers.

Even given the often-slanted pole questioning process and use of anti-gun terminology, 85% support a federal law preventing mentally ill people from purchasing guns, while only 59% support a nationwide ban on semi-automatic weapons, according to AP-NORC. So, although the question is often asked to encourage those surveyed to support gun control, the truth is, that most people want more focus put on the criminals.

People are starting to realize that there is no such thing as “gun violence” and that violence is a human behavioral issue.

According to “The Reload,” a Quinnipiac report shows dwindling support for modern sporting rifle bans even though so-called “assault weapon” bans have been at the top of the media hit list. New data shows support for such bans falling to under 50%. Imagine if the media presented an honest gun narrative and refrained from using terms like “assault weapon” and “gun violence.”

Gun control advocates recognize how important these and other scary terms are to their narrative, so they continue to use them regardless of the pushback they receive from Americans. The gun-grabbers are frightened of terminology that portrays firearms in an honest light.

Their fear of an honest narrative was revealed when a petition was filed with the FTC by several anti-gun organizations. It claimed that guns could be used to protect people and save lives or make homes safer was “false advertising.” The anti-American, pro-unarmed helplessness crowd consisting of The Brady Campaign, Giffords Law Center, and March For Our Lives members also claimed that any advertising which used “patriotic,” “military,” or “macho” imagery and language in firearm advertising was deliberately being used to appeal to “insurrectionists” and “mass shooters.” They understand the power of language, and they want to control the way it is used to benefit themselves and influence lawmakers, but their attempts at making half the country look like killers is quickly failing. Instead, they reveal that the political left is losing the ideological battle.

According to NSSF industry data, since 1990 there are now more than 24.4 million Modern Sporting Rifles (MSRs) in circulation as of 2020. That figure includes more than 4.5 million added since 2018. As a result, even Democrats are becoming skeptical of the attacks on modern sporting rifles.

“This is a bill that destroyed the Democrats in ‘94. I guess, do we really have a death wish list as Democrats?” “It undermines what we already did and reemphasizes to all the people in America that are not hardcore urban Democrats that our party’s out of touch.”

Their anti-gun fear campaign is failing, but that’s all they have.

The 2nd Amendment is not a privilege. It’s your right.

Republished with permission of Ammoland

Dan Wos is a nationally recognized 2nd Amendment advocate, Host of The Loaded Mic and Author of the “GOOD GUN BAD GUY” book series. He speaks at events, is a contributing writer for many publications, and can be found on radio stations across the country. Dan has been a guest on the Sean Hannity Show, Real America’s Voice, and several others. Speaking on behalf of gun-rights, Dan exposes the strategies of the anti-gun crowd and explains their mission to disarm law-abiding American gun-owners. Follow him online, Facebook, Twitter and Truth Social.