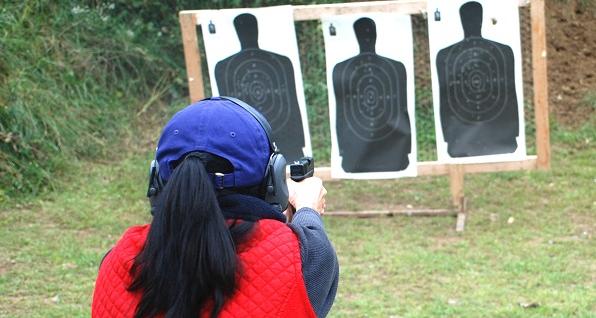 The Well Armed Woman Program - where the feminine and firearms meet

Women are the fastest growing segment of the shooting sports. A recent National Shooting Sports Foundation survey found that 37% of new shooters are female. The 18 to 34 years old age group make up about two-thirds of new shooters. While Ohio doesn't track concealed handgun license numbers by gender, women most certainly comprise a fast growing segment of the licensed concealed carry segment. So it is no surprise that The Well Armed Woman program is growing quickly.

Becky Bollinger, who started one of the newer Well Armed Woman Chapters, explains, "The Well Armed Woman (WAW) Program is a national organization started by Carrie Lightfoot in Arizona. She saw a need for women to learn about firearms in their environment. Women may be intimidated by men in the class room or on the range. We are often hesitant to speak up. We just don't learn the same way as the guys. She has standardized the leadership requirements. While only two years old now, there are 181 chapters in 42 states with almost 5000 members."

Bollinger learned about WAW and was aware of chapters in the northern Cincinnati area but nothing closer than an hour or more to drive from her home. Bollinger said, "I thought we have a great facility at the Clinton County Farmers and Sportsmen Association (CCFSA) and that we could attract women from surrounding counties. We have certainly drawn ladies from the surrounding areas. I attended the CCFSA open house in April 2014 armed only with handouts. The creation of a chapter was a dream at that point. I had no idea what the response might be. I had an overwhelmingly positive response. We had our meeting in May and have been meeting monthly since that time. There are currently 26 paid members in the chapter. Fifteen of the ladies have also joined the CCFSA. It is proving to be a win-win for both the WAW program and the CCFSA."

Women here are growing, learning and perfecting their handgun skills under the watchful eye of veteran shooters and range safety officers. Bollinger noted that quite a few of the woman have come a long way with their shooting skills in a very short period of time. She adds, "Our very first meeting we had several ladies who had never touched a firearm, some who had fired a shotgun but who had never shot a handgun and a couple who are competitive shooters. It really is a very broad spectrum of experience levels. We have been using the NRA Basic Pistol course. Most all have seen their shooting improve with understanding of proper grip, stance and shooting techniques. Some have gotten their concealed handgun licenses."

Bollinger is especially appreciative of the support received from CCFSA noting, "Everyone has been very supportive of our efforts. The range safety officers and other club volunteers have been super to ensure that the ranges are ready for our meetings. Everything is always ready for us to hang our targets and shoot. The club has been a great supporter of our efforts."

The ladies took full advantage of the time to practice shooting. It was obvious everyone was having a great time. The range officers commented how impressed they are with this group. They pay very close attention to the safety aspects of shooting. They are focused on their techniques making productive use of their range time to keep the skills sharp and continuing to improve. The chatter around the range tables really isn't any different than what the guys do - with a possible exception of comparison of the various colors of the handguns, holsters and range bags. Even in rural Clinton County at the range, the ladies maintain a sense of fashion awareness!

Bollinger said, "Most have improved their shooting positions. All maintain a high degree of awareness of safety on the firing line. They control the direction of their muzzle, keep their trigger finger in the proper position when not shooting and safely re-holster their firearm."

This is a great program for the ladies. It addresses specific questions they have that are different concerns with different viewpoints than the guys. Just in case someone hasn't noticed, the girls are built differently than the guys. They have different fashions which results in different needs if they chose to carry a handgun. They need answers and gear with their gender in mind. The Well Armed Woman provides the information. The ladies exchanging opinions and experiences with each other is a key factor to the success of the program.

Bollinger noted, "You will see equipment options designed especially with the ladies in mind. The Well Armed Woman Program has thirteen large boxes full of holsters and carry options. These are shipped to chapters for the meetings. The ladies can examine each holster, try them and see how each holster works for their particular situation and build. Holsters are expensive and a critical piece of equipment for concealed carry. One holster may not cover all the situations or options needed for safe concealed carry. Evaluating holsters and getting the one that will work for you is important."

In addition to the range time there is a meeting to address any chapter business plus have speakers on firearms related topics. This meeting featured Joe Eaton, Buckeye Firearms Regional Leader, who addressed current topics. Eaton presented information about the Buckeye Firearms Association PAC and Foundation. With the election looming large for gun owners, Eaton presented information on the PAC's endorsed candidates, as well as, a legislative update. He spent most of the time explaining the Faculty Administrator Safety Training & Emergency Response program which has trained over 300 teachers and administrators in emergency preparedness at schools. The program is aimed at overall school security, stopping active school shooters and saving lives through emergency training.