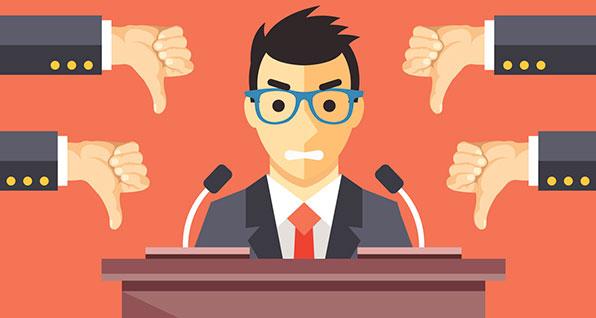 If you're unhappy with both Democrats and Republicans, you're not alone. Nearly everyone says they are disappointed with their own party and many long for an alternative on Election Day.

So it would seem that Libertarians, who embrace key policy positions of both major parties, and tend to be hardcore gun rights supporters, should be able to win a fair number of elections. But they don't. Why?

It's true that both major parties rig the system against third parties, such as creating laws that limit access to state ballots. It's also true that a winner-take-all system of elections favors a two-party system, where citizens are hesitant to "waste" their votes on third-party candidates with a low probability of winning.

However, these structural hurdles are not why Libertarians lose elections. The answer is much simpler, more obvious, and considerably more distressing.

Before I reveal the answer, let me explain that while I am a registered Republican, I am just as displeased with my party as anyone else. In fact, I consider my political outlook to be libertarian, favoring smaller government, lower taxes, and greater individual liberty on all fronts. So I have no beef with the Libertarian Party on many matters of policy.

I believe it would be healthy for Republicans and Democrats to be challenged by third parties to move beyond simple partisan warfare and seek something more than tribal conflict and greater consolidation of power.

Unfortunately, I doubt this challenge will come from Libertarians anytime soon because of the nature of the candidates themselves.

Why don't Libertarians win elections? Because they don't want to. Let that sink in. Then let me explain what I mean.

When you look at typical Republican or Democratic candidates, you see men and women who have a burning desire for public service. Most have a long history of public engagement, often going back to their school years. They attend city council meetings, serve on school boards, intern with legislators, run and win in hometown elections.

They enjoy the political process and take advantage of every civic opportunity available to them. When it comes time to run for higher office, they have a solid resume full of accomplishments and experience and a wide network of contacts and supporters enabling them to raise money and mount a campaign.

But when you look at the typical Libertarian candidate, you see something quite different. Most seem to hate politics and rant about the corrupt "system." They often show no interest in government or public service until they suddenly decide to run for office.

That means they have little or no political experience, few contacts, and no practical means of raising money. And what offices do they seek? President. Governor. U.S. Senate. Positions that are ridiculously out of reach.

To make matters worse, many Libertarian candidates lack the social skills necessary to garner support. They'll debate you all day long, but fail to recognize the difference between argument and persuasion, which is the key to winning any election. Voters cast their ballots for people they "like," not just for those they think are "right."

The old joke about Libertarians caring more about winning the argument than winning the election tends to be true. Far too many come across as somewhere between entitled and downright rude. And their supporters tend to relentlessly troll on social media, attacking anyone who doesn't support their candidate.

Every election season, Libertarian candidates or their supporters contact Buckeye Firearms Association. Do they ask for support? Do they suggest a meeting to discuss their campaign? Do they attend our events or spend time building relationships? Nope. Right out of the gate, they email, tweet, or troll on Facebook with confrontational messages: "You guys are idiots! You're establishment suck-ups! Why don't you support principled candidates?" Not exactly a great way to garner support.

And unlike major party candidates, who seek long-term relationships, and tend to stay in contact even when they're not running for office, Libertarians generally vanish after the election and are not heard from until they decide to run again.

Take for example this year's Libertarian candidate for Ohio Governor, Travis Irvine. According to his website bio, he's never held any public office. He says he interned in Washington D.C., though it's not clear if that was related to politics or something else. If it were for a Senator or Representative, you'd think he would specifically mention that.

His political accomplishments seem to be limited primarily to writing articles and making videos, and he appears to have no respect for "climbing the political ladder." Translation: I don't have public service experience and don't want to.

In addition, I looked at his financial filing with the Ohio Secretary of State before the 2018 general election, and his campaign had less than $2,000 on hand. Less than $2,000 for a gubernatorial campaign? I know Girl Scouts who raise more money selling Thin Mints.

Don't misunderstand. I'm not making fun of Irvine or any other Libertarian candidate. However, politics is serious business, and casting a vote is the most important civic act for any American citizen.

It begs the question, does any of this sound like a serious candidate? Does it sound like someone who honestly wants to win an election or has the ability to run a state with 11.6 million residents and a budget of more than $70 billion?

But who do supporters blame for the loss? After we pointed out that BFA could not waste an endorsement on someone with zero chance of winning, one Facebook troll echoed the earnest but unself-aware excuse I've heard election after election: "Well, if we had more people support us instead of establishment candidates, maybe we'd win elections."

Libertarians tend to be highly intelligent people, so it can't be that they don't understand how elections work. It must be that they simply have no intention of winning.

Libertarian candidates seem content to play the role of contrarian, bash the political process, and wage verbal warfare from the safety of the sidelines. And that's the way it will remain until the party gets serious. They need candidates who embrace public service and commit to doing the work necessary to gain real-world experience, work their way up through the ranks, build broad support, persuade voters, and win elections.

It's ironic that Libertarians so adamantly reject the idea of free riders and unearned handouts because that's exactly what they want from voters. Libertarians need to learn that they'll win only when they earn victories in the free market of politics.