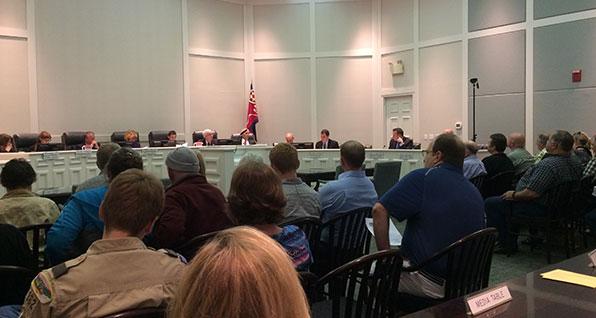 After the Parkland school killings on February 14, 2018, many gun control activists have felt empowered to push for draconian new gun laws. Here in Ohio, we've seen several cities question the "preemption" law (ORC 9.68) that overrides home rule and makes it illegal for cities to pass their own firearm ordinances.

Recently a resident of Worthington, Ohio, alerted us to a "resolution" proposed by City Council Member Scott Myers calling on state legislators to ban AR-15 type weapons and "high-capacity" magazines, require a "universal" background check which would necessarily include private transfers of personal property, and institute a "red flag" law that would allow authorities to confiscate firearms from a citizen until the citizen can show cause for them to be returned.

It was Paul Dorothy, President of Worthington for Good Government, who alerted us to this resolution and expressed concern over loose talk about attempting to enact laws on the local level to regulate firearms. In addition, he and other citizens were upset that the resolution tried to give the impression that it was being sent to legislators on behalf of all Worthington residents.

We provided Paul with information on 9.68 and case law on the issue and alerted Worthington residents on our newsletter list. I attended the city council meeting on May 7 to find out if the city may be serious about violating Ohio's preemption laws. The meeting room was packed.

The resolution letter had been dead last on the agenda, but because of the massive turnout for this meeting, the Council President moved it up to item one. Concerned citizens on both sides of the issue made statements.

While in the end the council voted 6-1 to send the resolution to legislators, gun owners scored a victory because 1) council members edited the letter so that it came only from those voting for it and not "on behalf" of Worthington residents, and 2) the threat of legal action forced council members to admit over and over that they could not and would not attempt to pass any local gun control laws.

Here is a point-by-point summary by Paul on the events of that night:

1. Our first victory came in the first 30 seconds when the Council President after consultation with the Law Director informed the citizens that Worthington has no ability to pass local gun ordinances. This was not by happenstance, but because we had been in contact with the Law Director feeding him case law and discussing Worthington's risk and exposure. Message clearly received.

2. The changes to the letter made by council were to remove all reference to "at the urging of our constituents" and "on behalf of the citizens of Worthington." Also, removed the lines "The citizens of Worthington see no reason why it is necessary or permissible for an individual to openly carry an AR-15 into a Worthington Park where our children play. However, this is precisely what Ohio law currently allows." We clearly let them know "You don't speak for me!"

3. Councilman Myers did not put forth this letter to "start a discussion." He was clear in the last council meeting that his plan was to push the letter forward in support of gun control and planned to take action to enact local gun control legislation after he worked out the details of that with Councilman Robinson. He specifically wanted to separate the letter from that action so that he would have something to waive in justification for taking the next step. If he wanted to "start a discussion" as his primary reason for this letter, it would have been stated as the purpose for the letter. I cannot believe, nor should you, that he became an AAG without the ability to clearly communicate his intentions via the written word.

4. The speakers were split down the middle 11 speeches for the letter and 11 against the letter. Those for the letter included folks from outside of Worthington. Those for the letter primarily focused on emotion, while those opposed on fact. We had some great speakers come out and really nail it ... a detailed explanation of 9.68, a history of the Supreme Court rulings on the 2nd Amendment, FBI stats and figures, refutation of all of the false statistics that are in the letter, just to name a few.

5. The letter will be sent to our representatives in its modified form still containing factual inaccuracies. For example, the claim that 71 uniformed officers have been killed in 2018 by gunfire. Council was presented with a list of all 27 officers killed in the line of duty in 2018 by gunfire, including their name, department, date of last roll call, shooter (criminal, LEO or other), and action (e.g. foot pursuit of murderer). Council was warned that this information was inaccurate and some still decided to sign and send the letter containing information they now knew was demonstrably false. As such, those Council members who sign the letter are guilty of lying in a council communication. This will be important if/when the 6 offenders run for re-election.

7. A last minute amendment to the motion by Councilman Smith appends the transcript of citizen comments to the letter when it is sent to our representatives. Since those comments do a nice job of refuting what is contained in the letter, this move essentially undermines the letter's validity.

8. We the supporters of the 2nd Amendment will ensure that the results of our future elections for Worthington City Council seat only those who will support and defend our Constitution. A big volunteer effort for a council race is 5 folks. We can certainly do better when the time comes to make sure we never have to worry about this situation ever coming up again in our fair city.

9. Our founding fathers pledged to each other "our lives, our fortunes and our sacred honor." Can we as modern patriots do any less?

If you're a resident of Worthington, I urge you to visit and follow Worthington for Good Government on Facebook. And, wherever you live, start attending your local city council meetings. While most of what city councils do is pretty boring stuff, these are the meetings where decisions are made that most directly effect you and your city.

If your city is doing anything similar, passing misleading resolutions or talking about enacting gun control laws, let us know. We are ready, willing, and able to provide support to you as you fight to defend your rights.