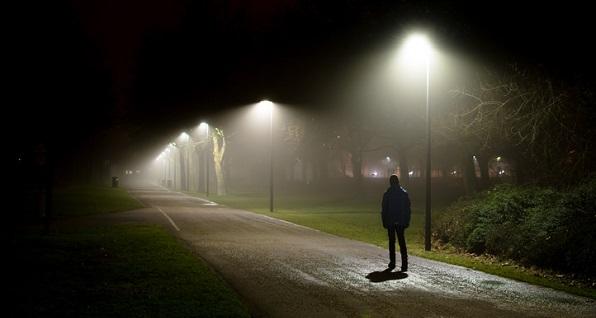 Your Tactical Training Scenario…Men in the Bushes

It’s 9pm and you are taking your dog for a walk around your neighborhood. You live in a “safe” area and you have walked your dog on this route every night for years without a problem. It’s dark, and as you walk you notice some shapes moving in the bushes ahead of you. You initially think the shapes are deer, so you continue to walk. As you get closer, two men emerge from the bushes. They are both sweating and out of breath. You notice some blood on their clothing.

The men apologize for startling you and say that they are out for a walk and got lost. They ask you the name of the road that you are on.

What would you do? Would you answer their question? What other response options do you have?

62-year old Jennifer Hurst faced this exact scenario. She became suspicious when the man asked about the name of the road. Her suspicions proved correct when he then pulled a gun and forced her to return to her own house. The two men robbed her and held her hostage for more than 12 hours before releasing her unharmed in another city. Read more about the story here.

It’s important to recognize that violent crime can happen anywhere. These men had just committed a home invasion robbery and were looking to escape. Home invasions are fairly rare, but they can take place in affluent areas as well as slums. After all, the robbers are looking for money, pills, small electronics, guns, and jewelry. Are they more likely to find that in a rich neighborhood or a slum?

There really is no “safe” area. If you are committed to ensuring your personal safety, you must be prepared at all times….even when you are in the “safe” neighborhoods.

As you “war game” scenarios like these in your mind to plan a proper response, you should be considering all of your response options. In general, there are only a few possible responses to any violent crime:

1) Freeze - Being so overwhelmed by the incident that you fail to take any action at all. This is the most common response and it is almost always leads to the worst outcomes.

2) Flee – Running away from the criminal or towards someone who can help you.

3) Resist – Fighting back either physically or verbally (by yelling and screaming).

4) Submit – Giving the criminal what he wants.

5) Posturing or Bluffing - Using some sort of deceptive ploy like pretending to be sick or telling a rapist that you have a disease.

I can’t tell you which option to choose. Each of you have different skills, mindsets, and motivations. You have to analyze the situation and decide which is best for yourself.

While I can’t tell you exactly what to do, I can give you some general guidance…

Submission should never be an option that you consider when someone is attempting to physically take you someplace else. Ms. Hurst’s case is a statistical rarity. Most kidnapped victims (especially women) end up dead. The criminal is trying to take you to a place where he is less likely to be caught when he commits his crime. You can’t let that happen. Doing ANYTHING else is generally better than submitting to a criminal when what he wants is YOU, not your property. Ms. Hurst is a very lucky woman.

If we rule out submission and freezing in this case, we are only left with flight, resistance, or posturing as viable remaining options. Flight probably isn’t the best choice here. The victim is a 62 year old woman. She probably can’t outrun two younger men. You might not be able to do so either. The average violent criminal is a male between the ages of 16 and 25. Can you outrun the average college-aged male in a sprint? A serious evaluation of your abilities is in order before you choose this option.

The leaves posturing and resistance. The posturing might work if the victim had a plan in place before the criminal approached. Most people can’t think on the fly well enough under stress to come up with a viable posturing or deception strategy while the crime is occurring. If you can’t fight, you should probably have several potential deceptive lines ready for any attack.

Bill Langlois advocated faking a heart attack when he taught senor citizens how to defend themselves. Bill was a San Francisco cop who was on the decoy squad. He posed as a confused elderly person to bait criminals into attacking him so that they could be arrested by his fellow officers. Bill was mugged 256 times in his decoy role. He wrote a book about the insights he took from these muggings and how they related to senor citizen safety. He was convinced that posturing and deception were the best courses of action for anyone who could not physically resist their attackers. His book is a valuable resource. It is long out of print but still available used on Amazon.com.

If you don’t have a deception strategy (or if it fails) the only response remaining is resistance. You are fighting two younger men and one of them is armed with a gun. How good are your odds if you don’t have a weapon of your own? Not good. That’s reality. You don’t get to pick and choose the moment you are attacked. If you rely on a weapon for defense, you need to carry it everywhere…even when you feel safe. Practice with your weapon of choice until you are good enough to defeat two younger and stronger attackers. Merely having the weapon isn’t enough.

For a more detailed evaluation regarding the comparable success rates of these strategies, check out my article Resistance to Violent Crime: What the Research Shows.

When you see stories like this one in the news, pre-plan a response in case you are faced with something similar. Take a look at the response options I listed above and analyze the advantages and downfalls of each before choosing what you think is best.

Having a planned response combined with a trust in your instincts will carry you through most situations you are likely to face.