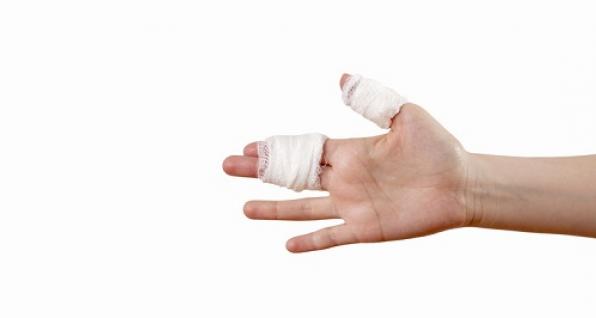 Take a quick look at this news article...

A man broke into a church rectory and attacked the two priests who lived there with a tire iron. The first priest ran to his bedroom and grabbed his revolver. He tried to shoot the attacker but was unable to do so because his trigger finger had been broken when he was struck by the tire iron. The attacker wrestled the gun away from the priest, knocked him unconscious and then used the weapon to kill another priest living in the rectory.

Hand injuries are extremely common in all types of fights. In fist fights, people break hands and fingers regularly when they strike hard targets like the head. When knives are involved, victims often take cuts to the hand when trying to defend against the blade. We even see hands and arms get shot on a regular basis. Think about where your hands are if you are shooting at an attacker. They are at chest level, directly in front of the area where your attacker is likely aiming. Hands are shot in a very high percentage of gunfights.

Do you have a plan in the event that your hands become so injured that you can’t pull the trigger?

I often see elderly folks and smaller women struggling to pull the triggers or rack the slides of their pistols at the range. They can barely operate their weapons in the best of conditions. These folks need to either increase their workout programs or get different guns because if they suffer any amount of disability in the fight, they likely won’t be able to effectively shoot their guns.

At the very least, you should be able to shoot well with your non-dominant hand. That’s the easiest solution when your dominant hand is injured. But you’d be surprised how many people never practice shooting with the “off” hand and thus never think about the hand switch during a stressful encounter.

After you gain proficiency with the “weak” hand, start altering your grip and trying to pull the trigger with fingers other than your index or “trigger” finger. Try each finger in dryfire with an unloaded weapon first. Make sure you have enough grip that you can continue to hold onto the gun through the recoil cycle. You would be surprised what is possible.

That’s one other reason why I generally prefer lighter recoiling weapons. In addition to being able to shoot faster follow up shots, I can also manage recoil much easier if I am injured or disabled in any way. I can hold onto my Glock 19 in 9mm with just a couple of fingers. I can’t do the same thing with my airlight titanium .357 magnum snubby. It’s something to consider.

Your homework assignment this week is to spend some extra time at your next range session shooting with your non-dominant hand. I would also encourage you to try pulling the trigger on your weapon with your middle and ring fingers as well. If you are going to try that, only load your gun with one round the first time you try. That way if you lose control of the pistol during recoil, a second shot won’t be accidentally fired as you drop or fumble with the pistol.

If you want extra credit for your homework assignment, buy a cheap drugstore finger splint and do a practice session with your trigger fingers immobilized.

If the priest in this story would have done this in even a single practice session, his co worker might still be alive today.