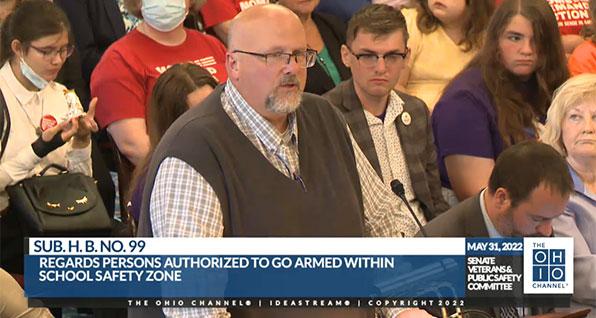 On Tuesday, May 31, 2022, Buckeye Firearms Association presented testimony in the Senate Veterans and Public Safety Committee supporting HB 99 to expressly exempt persons authorized to go armed within a school safety zone from a requirement to complete extensive peace officer basic training and return authority over security to local school boards.

The bill was amended to include annual criminal background checks for those carrying firearms in schools and also amended to incorporate Senate Bill 168, which creates a mobile training program. Members voted on party lines to pass the bill out of committee 4-2.

This was the second hearing for this legislation, sponsored by State Representative Thomas Hall (R-Madison Twp.). There were many opponents to the bill testifying, most of whom appeared to oppose guns in schools even in the hands of trained personnel, or wanted severe gun control in place instead, such as AR-15 bans.

Testimony of Rob Sexton
Before the Senate Veterans and Public Safety Committee
May 31, 2022

Chairman Hoagland, members of the Senate Veterans and Public Safety Committee, I am Rob Sexton, Legislative Affairs Director for Buckeye Firearms Association. We are thrilled to see this committee hear House Bill 99 and are here to convey our support for this essential legislation. We greatly appreciate Representative Hall’s dedication to see this bill enacted.

House Bill 99 has one purpose, which is to give our kids a fighting chance in the event the worst happens in their schools. House Bill 99 restores the right of school boards to create school safety plans that include armed staff. The bill sets minimum standards for this decision, but wisely leaves specifics to school boards based on their own unique set of circumstances.

House Bill 99 became necessary after the Ohio Supreme Court erroneously decided that anyone armed to protect our children in a school must have the same 700 hours of training as a police officer, which includes many items completely unrelated to confronting an attack on a school. This terrible decision eliminated school safety plans already in place across Ohio. Safety plans that can literally save lives.

It has been our contention, ever since the courts issued this awful decision, that the legislature needed to restore this life saving law before a tragedy takes place. And while last week’s horrific event in Texas didn’t happen here in our state, it certainly drove home the urgency of this important bill.

While some in the media, and opponents of firearms, have portrayed this bill as allowing armed school staff with minimal training, the truth is that many of these courageous volunteers who would put themselves in harm’s way have had extensive training, specifically in the type of scenario that occurred in Texas. I know this committee has heard or will hear more on these training opportunities.

We know the facts about this issue. We know that police response times differ greatly across Ohio. And we know that every second counts and saves lives. Recent articles in the media indicate that there is interest in making some additional changes to HB 99, which is of course, your prerogative. As you evaluate this, we ask that you consider several things:

First, the legislature has a balancing act between what it considers to be adequate training and avoiding what will actually serve as a disincentive to people actually taking the training. We actually want school districts and people to be willing to take advantage of this option to protect their kids. It is also important to remember that because HB 99 includes the requirement of a concealed handgun license, the total training hours would be 28, and not 20 as has been reported in the media.

Second, the court’s decision shut down school safety programs with armed staff across this state. Programs that were working and in place to protect our children. Please consider grandfathering in those that had already been serving in this capacity for the upcoming school year. Many of these people had already completed training designed for just this scenario. Without this consideration, it is highly unlikely to retrain 3,000 school staff in time for the opening of school in the fall, maintaining the soft targets that we now have in our schools.

Last, we ask that as the committee makes these decisions regarding training, that it leaves private training options as one avenue for school districts instead of a complete overhaul that mandates an OPOTA or state designed curriculum. It makes little sense to reinvent the wheel when there are currently functioning programs designed specifically for this very situation. Ohio should take full advantage of the work already done by experts in this field.

Buckeye Firearms Association strongly supports HB 99. We appreciate your consideration of these additional issues and asks this committee to approve this legislation.

Given recent events in Uvalde, Texas, where 19 children and 2 adults were killed by an active shooter in an elementary school, HB 99 must move quickly. Many of our own schools in Ohio are soft targets since being stripped of effective security programs by a bad Ohio Supreme Court ruling.