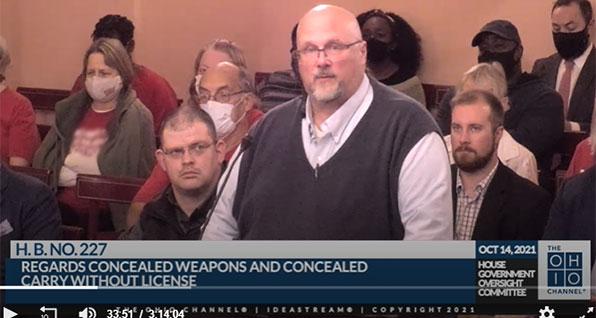 Buckeye Firearms Association (BFA) testified in support of bringing Constitutional Carry to Ohio, and answered objections to the bill by anti-gun groups.

BFA has been working hard on making Constitutional Carry a reality in Ohio. We have been personally meeting with legislators, one-by-one, on an almost daily basis, and talking to committee members and leadership in the Statehouse in order to line up support in both the House and Senate. It is time for Constitutional Carry in Ohio, and we are pushing to have a bill on the Governor's desk before the end of this year.

Please contact your elected officials to let them know YOU support Constitutional Carry too. If you've already contacted them, please keep it up, at least once a week, so they know how you feel and we can keep the momentum going.

We have prepared an email you can send, but we encourage you to voice your support in your own words. Be polite but firm. Legislators want to get this done. They just need to keep hearing from all of us.

Below is the text of our testimony. We have also discussed SB 215, the Senate Constitutional Carry bill, in two recent episodes of our Keep and Bear Radio podcast.

Testimony of Rob Sexton
On behalf of Buckeye Firearms Association
Before the House Government Oversight Committee
October 14th, 2021, 10:00 AM

Chairman Wilkin, members of the House Government Oversight Committee, I am Rob Sexton, the Legislative Affairs Director for Buckeye Firearms Association. BFA is civil rights organization that has been defending and advancing the rights of over 4 million Ohio citizens for more than 15 years, with a long and proven record of changing laws for the better.

I am here to express our strong support for Substitute House Bill 227. This bill would remove many burdens on law-abiding gun owners which do nothing to reduce crime or saves lives.

HB 227 would create what is often referred to as Permitless Carry, License Optional Carry, or Constitutional Carry, which is the ability for law-abiding adults to carry a concealed firearm without licensing or other mandated requirements. This change alone would remove irrational, unnecessary, and unconstitutional burdens for Ohio citizens who merely wish to exercise their Second Amendment rights and defend themselves when faced with a lethal threat. Ohio’s constitutional framers were crystal clear on this matter. Article 1 Section 4 states, “The people have the right to bear arms for their defense and security.”

HB 227 Does NOT Change Use-of-Force Standards

Too often the rhetoric opposing legislation that is meant to make Ohio live up to the words in its own constitution is emotionally based. Worse, the rhetoric is too often fact-less instead of fact-based. Whether it was the first concealed handgun law way back in 2004 or last year’s debate over the repeal of the duty to retreat, fears have been raised time and time again that we would experience anarchy as a result. There would be blood in the streets with people shooting each other over parking spaces. Time and time again, these fears have been proven false, but the rhetoric endures.

I’d like to introduce some new material into this discussion. While studying research surrounding the debate over Constitutional Carry, we came across a 30-year study released by the American College of Surgeons. The college sought to discover whether there was any link between increases in violent crimes involving guns and the liberalization of gun laws. They compiled FBI and other law enforcement data from all states, including very restrictive states such as Illinois and New York, all the way to the more permissive states such as Arizona and Vermont. What they found is what we’ve been saying for decades: Law-abiding gun owners, who simply want to utilize their constitutional rights to protect themselves and their loved ones, are not the problem.

I will quote from the study. “This study demonstrated no statistically significant association between the liberalization of state level firearm carry legislation over the last 30 years and the rates of homicides or other violent crime.” That is pretty good, isn’t it? But it gets better. The authors went on to say, “Policy efforts aimed at injury prevention and the reduction of firearm-related violence should likely investigate other targets for potential intervention.”

We’re not the problem. But we’re concerned about the way things are going right now in our country and our state. Interest in carrying a firearm and firearms training is at all time highs. People are genuinely and legitimately worried about their own safety and want to take steps to protect themselves and their loved ones. They’re seeing the spikes in violent crime. They’re seeing constraints on law enforcement.

We’re seeing surging interest from all types of people. Women and African Americans are among the fastest growing segment of firearms purchasers. A person who lives, works, and drives through areas that have recently exploded in violence should not have to complete government paperwork, submit to a background check, take a class, and then wait on the government to exercise a right guaranteed by the state of Ohio. A woman fleeing an abusive relationship should not have to apply for emergency privileges before she can carry a gun to protect herself or her children. These things became even more clear over the last year and a half as many of our sheriffs were unable to process permit applications over COVID restrictions.

We really appreciate the work put in by members of this committee to find pathway forward on this bill. And we appreciate Representatives Brinkman and Jordan’s commitment to work together to ensure this bill would have a chance to make it to Governor DeWine’s desk.

This really is a fact-based debate. The law-abiding are not a threat to others in Ohio or in any other state. They do not become law abiding because the state confers upon them a license. Subjecting them to unnecessary requirements and permits does not make them better people. It just burdens them with extra costs of money and time. Meanwhile, those who would do us harm ignore these same laws. It is for these reasons that we ask this committee to move HB 227. I thank you for your time. I am happy to answer any questions you may have.

"The Constitution of Ohio reads that we have a right to keep firearms for our security and for our defense. And currently, you know, people have to jump through hoops," said Rob Sexton with Buckeye Firearms Association.

Current regulations include eight hours of mandatory training and a federal background check. The bill would keep the background check in place, but without the need for a license, the requirement to complete basic training would go away. Sexton said the system has too much red tape for those that need quicker access to guns.

"You really have to ask yourself if I'm a person who's in a domestic situation that's gotten violent, do I need to wait for the government to catch up before I'm allowed to protect myself when the Constitution already says I can,” Sexton said. “That's the kind of example that leads us to say it's time that Ohio join the other 21 states that already have constitutional carry.”

"I can carry openly without any kind of permit whatsoever but if I do I'm called provocative, so if I conceal it so to not be provocative somehow that's not constitutionally protected," Sexton said.

“People have to jump through hoops, they have to get fingerprints, background checks, cost, the whole nine yards,” said Rob Sexton, Legislative Affairs Director of Buckeye Firearms Association.

Sexton said this bill is the group’s top priority. He said with crime on the rise people need to be able to easily protect themselves.

“If we don’t have the ability to arm ourselves and protect our loved ones then really the only people out there are the criminals, and they don’t care whether there is a permit or not,” said Sexton.