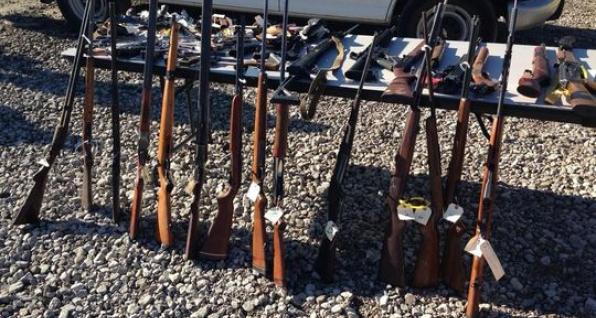 In recent years, headlines have told the tale of a bleak financial picture in cities like Cleveland, Columbus and Toledo. Fewer police officers, layoffs, pay freezes, and reduced services.

In this cash-strapped atmosphere, does it really make any sense for bureaucrats to destroy thousands upon thousands of dollars in city property that could instead be sold?

According to WKYC (NBC Cleveland) and the Cleveland Plain Dealer, that is exactly what Cleveland Mayor Frank Jackson has been doing for the past eight years - destroying thousands of guns the city paid for with city tax dollars.

More than 270 guns surrendered at this year's City of Cleveland Gun Buy will be recycled into new steel for consumer goods.

The city planned a gun melt Wednesday in which all of the guns will be placed into a furnace iron ladle and then melted by about 200 tons of molten iron at temperatures of 2,400 degrees Fahrenheit.

"This gun melt will take guns surrendered by their owners, recycle them into steel, and prevent them from ever being used in an act of violence," said Mayor Frank G. Jackson in a news release. "I'd like to thank ArcelorMittal for being a good partner in the City's efforts to improve safety and reduce gun violence."

It was much the same last year, when Jackson and company melted down more than 350 guns they had just paid cash for. At the time, Police Chief Michael McGrath said that the city has melted down more than 8,000 guns. Even the Cleveland Scene, which has certainly never been accused of being pro-gun rights, has observed that the annual property destruction effort is "more symbolic gesture" than a "practical remedy" that will reduce crime in Cleveland.

The only thing Mayor Jackson is reducing is the city's treasury - many of these firearms could be sold and the money added to a city treasury in desperate need.

Unfortunately, as the Columbus Dispatch reported in August, the practice of city governments destroying valuable property is all too common around the state.

Of 24 police agencies surveyed by The Dispatch in Franklin and its six surrounding counties, West Jefferson’s in Madison County is the only one that does not have a policy for disposing of confiscated guns. Police Chief Terry Ward pledged to organize the property room when he became West Jefferson’s chief two years ago.

“Right now, it’s in a recovery phase,” Ward said last week. “We rebuilt the property room to where it’s organized, but we’ve got a lot of work to do.”

Under Ohio law, police must obtain a court order to dispose of an unclaimed or forfeited firearm, but how a gun is disposed of is up to each agency. Some melt guns or cut them into pieces of scrap metal. Others keep the guns for use by officers or sell them to reputable dealers.

“It’s up to each individual department to go through protocols and build policies,” said Joseph Morbitzer, president of the Ohio Association of Chiefs of Police and the chief of Westerville’s department.

Some officials from the 24 police agencies surveyed said they use several methods to dispose of guns.

Pickerington police, for example, borrow the Jaws of Life from the fire department to cut some guns in half. Others they melt down, use for training or sell.

Ohio State University police keep some weapons for their officers and melt the rest. Worthington either cuts guns into pieces or sells or reuses them. Neither agency was able to say how many guns it took in last year.

Seventeen departments said they melt firearms at a steel mill.

Sgt. Rich Weiner, a spokesman for the Columbus Division of Police, said guns are transported under police escort to an undisclosed steel mill out of state. The secrecy is because “we don’t want someone hijacking us,” Weiner said. “Our personnel will go there and watch the entire burn to make sure no one takes one.”

The steel mill burns the guns at no charge as a courtesy to police agencies, Weiner said.

Columbus confiscated 2,436 guns last year, he said, guns that were found by officers, turned in by citizens or used in crimes.

Bexley and Whitehall are among the agencies that cut up guns.

“I take them to the city garage and watch them get cut up into a couple of pieces with a band saw,” said Tony Martin, a volunteer police officer who takes care of Bexley’s property room. Then he deposits the pieces in trash containers throughout the city, he said.

Officials from 20 departments in central Ohio said they keep firearms for officers to use during training or on duty.

According to the Dispatch, only seven departments said they sell guns to a dealer and use the money or credit to purchase firearms or ammunition. Some police officials said they wouldn’t sell guns, out of fear that the weapons would end up back on the streets, but others don’t see that as a concern.

“We only sell to someone that is reputable,” Newark Police Sgt. Scott Snow is quoted as saying. “People we sell to have laws they (must) follow.”

In 2013, Rep. John Becker (R-65) introduced House Bill 210, which would prohibit law enforcement agencies from destroying an unclaimed or forfeited firearm, requiring them to instead sell the property to a federally licensed firearms dealer all which are legal for persons to possess, that are not used by an agency for police work, and that are not otherwise sold for sporting use or as a museum piece or collectors' item.

Firearms are property. When law enforcement agencies destroy firearms, they are destroying assets. At a time when budgets are tight, it makes no more sense to destroy firearms than it does to destroy office furniture, vehicles, computers, or other assets that are generally sold or auctioned off when they are no longer needed.

Some firearms are rare or collectibles with considerable value. Some may have historical significance. Destroying these or any guns does nothing to help a crime problem, and harms a law enforcement agency’s finances compared to auctioning them off.

Under HB 210, guns that are to be disposed of would be sold or auctioned to a federal firearms dealer. They would sell them to individuals. Going through a firearms dealer ensures that anyone who buys one of these guns would first be required to pass a federal background check. The last thing we want to do is return guns back to criminals. This bill has appropriate safeguards to ensure that only law abiding citizens would be permitted to buy the firearms that the law enforcement agency is disposing.

Many guns could be sold to individuals for home defense or self-defense. As many of you know, often times, the people who have the greatest need for self-defense can afford it the least.

Over the past few years, the enormous demand for firearms has driven up prices. HB 210 will help make self-defense more affordable for the economically disadvantaged. Many want, or believe that they need, quality firearms to protect their families, but can't afford them because of today's inflated prices.

The departments selling the guns would have increased revenues without needing to take any additional funds from our taxpayers. The money could be used for training, bullet proof vests, tactical gear, or fulfill other needs that are currently going unmet because of budget constraints.

In Guns & Ammo's ranking of "Best States for Concealed Carry," Ohio ranks 41st, and falls far behind all of its border states. Michigan, which passed concealed carry one year before Ohio, ranks 31st. West Virgina ranks 32nd, Pennsylvania is 15th, Indiana comes in 14th and Kentucky is ranked 11th.

While working on campaigns this weekend, please ask every candidate if they believe that Ohioans are more dangerous and less trustworthy than Pennsylvanians, where unclaimed property, including firearms, must be sold. Such thinking is the only way to justify current state law. Ask state legislative candidates what they are doing to fix Ohio law.

If you are unable to work on state legislative campaigns, call your state senator, state representative and Governor Kasich.

If they have any hope of bringing the Buckeye State into the 21st century when it comes to gun rights, Ohio's pro-gun rights legislators have their work cut out for them. No pro-gun legislation has been sent to the governor's desk since December 2012. While the Ohio House passed House Bill 203, an important concealed carry reform bill last year, the Ohio Senate has failed to act.

If legislators do not act, HB 203, HB 210 and many other pro-gun bills that are pending will die at the end of December.

If you want to see the General Assembly act to improve gun rights in ways that are already enjoyed by the majority of other states, call your Representative and Senator NOW and ask them when pro-gun legislation is going to move in Ohio. They want your vote on Tuesday. Tell them we want their votes too.