Letson, who is term limited and cannot run for re-election in the House, publicly announced his intention to run during the Ohio Democratic Party's executive committee meeting in Columbus. The party has endorsed his candidacy.

In June 2012, the 61 year-old attorney took to the floor of the Ohio House to speak against passage of House Bill 495 (Reciprocity & Concealed Carry Modernization).

Having come prepared to introduce an anti-gun amendment to make Ohioans' private, personal information from concealed handgun license records open to the public, Letson decided not to make the motion, calling it "futile."

Instead, Letson began his floor speech by telling his colleagues that he wanted to go over "what the Second Amendment actually says."

"The Second Amendment comes in two parts. Two parts," Letson said. "The lawyers of you know. The rest of you may not. But it starts out with 'A well regulated militia, necessary for the security of a free State....'"

Of course, you don't have to be an attorney to observe that Letson inaccurately quoted the opening phrase, which actually states, 'A well regulated Militia, being necessary to the security of a free State...' Letson's forgotten words may not have made a big difference in the point he was about to try to make, but it begs the question - should a man who can't even accurately quote the Second Amendment really be lecturing on the floor of the Ohio House about its meaning, let alone running for the Ohio Supreme Court? 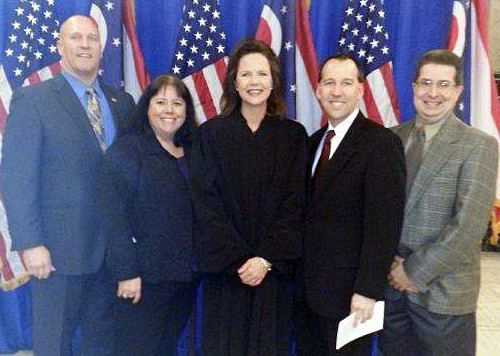 Leaving aside Letson's flawed argument that today's police and military have taken the place of militia, the bottom line is that the Democrats' candidate for Ohio Supreme Court is on record suggesting that the Second Amendment is obsolete.

But you also don't have to be an attorney to know that, in District of Columbia v. Heller (2008), the United States Supreme Court found that the Second Amendment there is "clearly an individual right, having nothing whatsoever to do with service in the militia." (emphasis added)

Letson had another embarrassing moment on the floor, when he asked (with a straight face), "how does this create jobs?" Apparently it was sufficient enough to ask a silly rhetorical question, Letson felt the need to give a silly answer, saying that not only does it not create jobs, "it kills them...."This bill doesn't do anything to enhance employment in Ohio."

Despite Letson's rambling anti-gun rhetoric (which can be viewed here in its entirety), the bill passed by a significant majority, with more than twice as many representatives voting for it as voting against it.

Justice Kennedy, Letson's Republican opponent, received Buckeye Firearms Association's endorsement in the 2012 election and unseated anti-gun Democrat Yvette McGee Brown (D). After her victory, she told a gathering of the Ohio Republican Party State Central Committee that hard work and support from gun rights advocates across the state paved the way to her victory.

Now that her next anti-gun opponent is known, I have no doubt she can count on the same level of support from Ohio gun owners again in 2014.