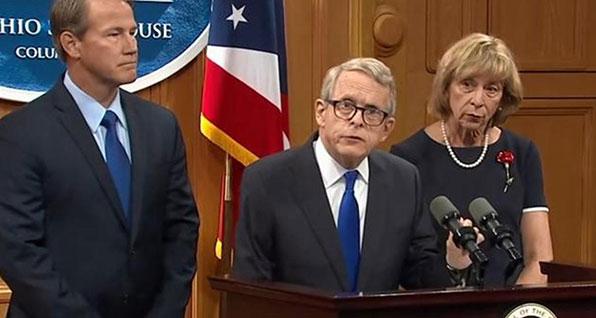 Reactions to Governor DeWine's safety initiative announced at the press conference on Tuesday, August 6, 2019 have been strong and varied.

Many have said he is not going far enough and are calling for sweeping gun control laws in response to the Dayton mass killing, criticizing the Governor for his continued support of pending bills to loosen firearm restrictions. Others have said he is going too far and are upset at his suggestions for protection orders and additional background checks.

We've been talking to the media and our supporters almost nonstop since the press conference and many questions have come up. I'd like to share some of the answers we've been giving.

First, here are the 17 actions the Governor outlined Tuesday. This write-up is from the Governor's office:

Two are of primary interest to law-abiding gun owners. We have advised the Governor, both before and after his election, of our positions on these issues, namely that we will never support so-called "red flag" laws or mandated background checks for personal, non-commercial transfer of firearms. This has been our stance since the beginning of BFA and will continue to be our position.

Unlike past administrations, this administration has listened to our reasoning on these issues and is attempting to make gun rights a high priority. This was never something previous Governor Kasich would do. Kasich treated the Second Amendment as little more than an annoyance in the political process.

However, even though it does appear that we have a very different kind of administration now, we continue to be concerned about including protection orders and background checks in this initiative. We have explained clearly that current law is better than any red flag law. We have also discussed in detail why background checks would not have stopped the Dayton killer.

There is no bill right now, so we have no legal language to examine. The devil is always in the details when it comes to law, so all we have to go on is what the Governor and Lt. Governor are saying about their proposals. When there is a bill to look at, we'll read it closely and render our opinion.

As for the other 15 suggestions in the initiative, there appears to be a heavy focus on mental health and enforcement of current laws. This is good. Crime is a people problem, not a gun problem. It is commendable that we are finally having a real conversation about mental health, crime, and how to directly deal with those who are a danger in our society rather than punish law-abiding gun owners with onerous new gun laws.

Here are some questions we've been getting over the last day or so:

No. Never have. Never will. The problem is that these don't provide for due process BEFORE guns are taken. We observe due process in other areas of law, so we can't make an exception just because some people don't like guns.

Is the Governor proposing a "red flag" law?

We believe he is trying to avoid the problems past laws have presented. He and Husted spent a lot of time at the press conference talking about due process and how they wanted to deal directly with people's behavior. However, we will need to actually see a bill and read the details before we can know exactly what is being proposed. As far as we know, there is nothing written yet. If we think due process is lacking, we will oppose this part of the initiative.

Why is the media talking about "red flag" if the Governor is saying he's suggesting something else?

Because the media follows familiar storylines and use language they understand. If the Governor is actually suggesting a different idea, that's getting lost in the media coverage. The media is also not taking the time to dig into the details or wait to see bill language. Typically, reporters don't read bills beyond the title and summary.

What about so-called "universal" background checks?

BFA opposes universal background checks for several reasons. First, they're not actually universal. The most violent criminals tend to get their guns illegally and actively avoid background checks. Second, the background check system is broken. The information that is supposed to be included is often not reported by law enforcement agencies. Third, the only reason some people support universal background checks is that they want to prevent individual gun owners from occasionally giving or selling their firearms to other individuals, making criminals out of otherwise honest people. We believe guns are personal property, same as lawn mowers or furniture. So this is a direct infringement of personal property rights.

What do you think the answer is to active killers?

We have always supported a focus on mental health. Active killers are obviously troubled and need help. In the case of the Dayton killer, he had a "hit list" in high school. The school, the community, the family, and law enforcement knew about this troubled young man many years before he actually killed people. But nothing was done. Plus, our current laws prevent people who are having a beer or casual drink from carrying a gun for protection. This made nearly everyone in the vicinity of the Dayton murders helpless against an armed attacker. This is perverse and we hope to change this area of law.

What should we do about other kinds of violent crime?

I answered this question when I wrote an article on how to reduce violent crime. Based on real-world results, I suggested that we hire more police, enforce current law, and keep violent criminals locked up. It's not rocket science. There is an illogical tendency today to call for more and more gun laws and simultaneously hamper police efforts, ignore laws already on the books, and reduce sentencing or even release offenders early. Until we take violent crime seriously and stop playing games with people's lives, we have no chance to affect crime rates.

Should AR type weapons be banned?

No. Of course not. There are millions of these guns but only a tiny handful of disturbed people who use them to murder. Punishing millions of Americans for the terrible acts of a handful of sick people is wrong and unconstitutional. This is a people problem, not a gun problem. Proposals for gun bans generally come from those who just don't like guns anyway. We've seen mass murder with shotguns, pistols, trucks, knives, and bombs. We should focus on the problem, not on the tools.

Should "high capacity" magazines be banned?

No. Again, bans or limits on magazines are a red herring. We've tried laws like this in the U.S. and they've made no difference whatsoever. We must focus on the people committing crime and on people who are mentally troubled if we want to make any kind of difference.

What do you say to someone who loses a son or daughter to violence?

I'd say it's tragic to lose anyone for any reason. And I truly feel for those who grieve a loved one killed by a madman. But my personal reaction is anger and frustration. I'm angry that crime is used as a political football instead of seen as an actual problem to solve. And I'm frustrated that the gun community knows so much about guns and crime, yet gun control advocates never listen to us when we make simple suggestions for reducing crime. It's maddening that those who wish to introduce an endless stream of gun regulation know virtually nothing about the topic and don't even care about learning. Of course, there are some who DO know about guns and crime, but simply have a political agenda to damage conservatives, libertarians, and Republicans.

When will we know more about what the Governor is proposing?

When a bill is introduced. Early indications are that he wants to fast-track this, but there is no timeline we're aware of. Legislation could prove to be difficult to write and even more difficult to pass because of all the complex issues involved in these 17 points. DeWine has said that he wants to focus on laws that can get through the legislature, so it's likely that some of the 17 points will be amended or removed as time goes on. We would encourage the administration to focus solely on mental health and crime, rather than guns. This is something that nearly everyone can get behind.