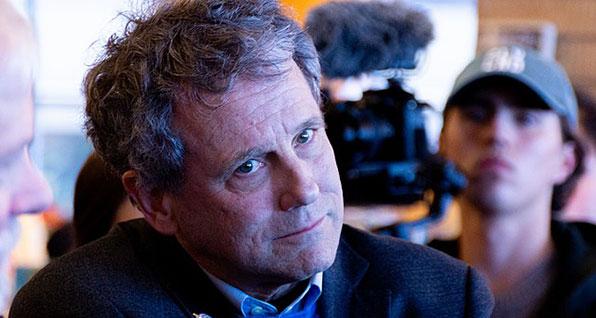 Back in July 2022, I created an action alert to help BFA supporters contact U.S. Senators about H.R. 1808. The so-called "Assault Weapons Ban of 2022" had just passed the House, and we wanted to discourage the Senate from moving the bill.

While I'm sure anti-gun Sen. Sherrod Brown promptly received the email I sent, it's taken two months for him to respond. And oddly, he doesn't comment on H.R. 1808. Instead his message talks about the "Bipartisan Safer Communities Act," the package of gun control measures jammed through the legislature and signed by President Biden a month earlier.

Maybe he didn't want to admit that we've been successful in stalling H.R. 1808. Or maybe because he's already in campaign mode for 2024, he preferred to issue what amounts to a press release on gun control policy. Who knows?

Whatever the reason for the long delay and the off-topic response, his message is pretty much what you would expect for Ohio's anti-gun Senator: full of well-worn gun control rhetoric and outright lies.

Here's the text of Brown's email:

Thank you for getting in touch with me about firearm-related legislation. I appreciate your sharing your views.

Mass shootings in America have become far too common, including right here in Ohio, in Dayton's Oregon District. That's why we worked to pass the Bipartisan Safer Communities Act, commonsense gun safety legislation that will help protect families and children and reduce violent crime across the country. I was proud to support this bill and vote for the legislation President Joe Biden signed into law on June 25, 2022. This was the first major gun safety legislation in nearly three decades.

The Bipartisan Safer Communities Act will close the "boyfriend loophole," prohibiting anyone convicted of domestic violence from accessing guns, and it will expand background checks for people under 21 years old to include their juvenile records. This legislation also includes one of the most dramatic expansions of mental health support in years - it will expand funding for crisis intervention and mental health services, allocating $500 million for school-based mental health services and strengthening school safety. It will crack down on "straw purchasers," giving tools to prosecutors to target illegal transportation of weapons. This legislation will help make our schools and communities safer and save lives.

We must build on this success to advance gun safety in the United States. I have always respected the Second Amendment rights of hunters, collectors, and other law-abiding gun owners; banning items like assault rifles and extended magazines does not unfairly infringe upon those rights. The singular purpose of these types of weapons and accessories is clear: cause the maximum amount of death and destruction possible in the shortest period of time. When Americans are not safe in their schools, movie theatres, and houses of worship, we must act to curb gun violence.

I support banning assault weapons in this country; I voted in support of the original assault weapons ban in 1994, and I voted to renew it after the Sandy Hook tragedy. Currently, I am a cosponsor of the Assault Weapons Ban Act. I am also a cosponsor of the Background Check Expansion Act, legislation to close loopholes in our background check system so that people who buy guns on the internet or at gun shows have to go through the same background checks as law-abiding gun owners who buy their guns at stores.

In addition, I am a cosponsor of the Background Check Completion Act, which would prohibit a licensed gun dealer from transferring a firearm to an unlicensed person prior to the completion of a background check. Current law permits a licensed gun dealer to transfer a firearm to an unlicensed person if a submitted background check remains incomplete after three business days, a loophole that puts everyone in unnecessary danger. And I supported the bipartisan Fix NICS bill, which strengthened our background check system by requiring federal agencies to better report information to the National Instant Criminal Background Check System to ensure that firearms do not end up in the hands of people who are a threat to the safety of anyone.

I have also supported legislation to prevent those on the terrorist watch list from buying guns because if you're too dangerous to get on an airplane, you're too dangerous to buy a deadly weapon. As a cosponsor of the Gun Violence Prevention Research Act, I support repealing laws that prevent the Centers for Disease Control and Prevention (CDC) from conducting research on gun violence. The successful repeal of this prohibition is an important step forward for gun violence research.

For too long, the gun lobby, led by the National Rifle Association (NRA) and gun makers, have prevented commonsense legislation on gun violence from being considered or passed by Congress. Nevertheless, despite their determination to stand in the way of safety measures, I will continue to fight for commonsense, constitutional legislation that will protect our citizens from gun violence.

Commonsense changes like the Bipartisan Safer Communities Act will help save lives and reduce the risk of future mass shootings. I will continue to push for the Senate to consider gun safety measures in the wake of these deadly massacres in Buffalo and Uvalde, and as firearms-related legislation comes before the Senate, I will keep your thoughts in mind.

Thank you again for contacting me on this important issue.