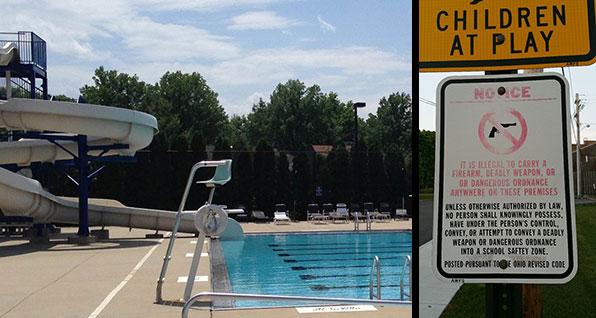 After a one year battle, the city of University Heights, Ohio, has finally relented and removed 4 no-gun signs from a city-owned park.

And just as I reported in May of 2017, recounting the successful efforts of a citizen to fight an unconstitutional gun ban in Marysville, the victory in University Heights belongs to one citizen who simply would not take "no" for an answer.

In this case the citizen is Jeff Corbett, who's not even a gun owner, just a concerned family man who saw a wrong in his city and decided to make it right.

Here's how Jeff detailed the situation to me:

The City of University Heights, in Cuyahoga County, has a playground within a city-owned park called "Purvis Park," located at 2198 Wrenford Rd, University Heights, OH 44121. The fence that surrounds the playground has two quite faded signs that note that it is prohibited to bring a gun into a school safety zone. There are two additional signs at the two entrances to the park.

The playground is bordered on the north side by a picnic table pavilion, the east by a parking lot, the south by tennis courts, the southwest by a field and the west by a pool. The pool and tennis courts are city owned. The field may be owned by a local school. It is adjacent to a school building.

In correspondence with the school board, the person that emailed me believed that the field was theirs. However, both the school board official and the city in emails to me said that the playground is indeed part of the city’s property. It appears to me that even if the field belongs to the school, their jurisdiction ends at the city playground's edge and the signs are thus incorrect and must be removed.

As I would soon realize, Jeff is a force to be reckoned with. Not only did he research court cases, he photographed the offending signs, accessed real estate records and maps, and fully documented his phone calls and correspondence with city officials. I'm not easily impressed, but this was impeccable work.

He contacted Mayor Susan Infeld, Law Director Luke McConville, Councilman Michele Weiss, and a Staff Assistant at the Board of Education to gather information, confirm facts, and explain why the signs must be removed. For months, the city maintained that the park is a "school safety zone" because, as the Mayor argued, both the middle school and high school use the tennis courts for gym classes.

In August, I wrote a letter to the Law Director, outlining Ohio's preemption law, our Foundation's lawsuit against Cleveland in 2009, the Ohio Supreme Court ruling against Cleveland in 2010, and details about various Ohio cities who have been sued or persuaded into reversing gun bans and removing no-gun signs, including Marysville, New Philadelphia, Clyde, Toledo, and Miami Township. I received no response.

After multiple emails, letters, and phone calls, it became clear that the city would not budge. By September, after 9 months of discussing the issue with officials, and making it crystal clear that University Heights was in the wrong, Jeff told me that the Law Director promised to send him a letter explaining the city's position and declaring that they had no intention of removing the signs.

At this point, I began discussing options for legal action with our attorneys, waiting only for the Law Director's official letter so that we could then formally respond. But that letter never arrived. And despite repeated requests for the letter, nothing changed through the holidays and into the new year.

I told Jeff the city must just be stalling, hoping for us to give up. And I was convinced that legal action was the only option to get those signs removed.

But then, on January 22, 2018, as I sat waiting for a plane in New York's LaGuardia Airport, I received an email from Jeff:

I took a call last hour from University Heights mayor Michael Brennan. He informed me that after a careful review of the pertinent laws, the city could find no justification for keeping the "No Concealed Handguns" signs posted.

Last week he advised the Service Department to remove the signs. I am sending you this email from Purvis Park and can attest that all four signs that were previously posted have been removed.

Wow. What had happened here? I can only speculate, but the tide may have turned after the November 7, 2017 election, when Michael Dylan Brennan, an attorney with no record of holding public office, defeated University Heights incumbent Mayor Susan Infeld.

According to Cleveland.com, Infeld had a "rocky relationship" with City Council, and all but one of the council members endorsed her opponent Brennan for Mayor. It was shortly after the election that the no-gun sign stalemate ended and the city changed its mind. So it's not a stretch to assume that former Mayor Infeld had been the real problem, or certainly wasn't willing to fix the problem, and that incoming Mayor Brennan used his power to review the law and do the right thing.

Yes, the no-gun signs were old and faded. But they were an infringement to our rights as Ohioans. Getting them removed represents not just a victory for Jeff and for other law-abiding citizens, but a victory for law and order itself, a pillar of our civilization. Our elected officials, and our government, must abide by the same laws as the rest of us. And as we see this core concept challenged across America, it's important for all of us to speak up, push back, and through victories large and small, keep fighting for our Constitutional Democracy.