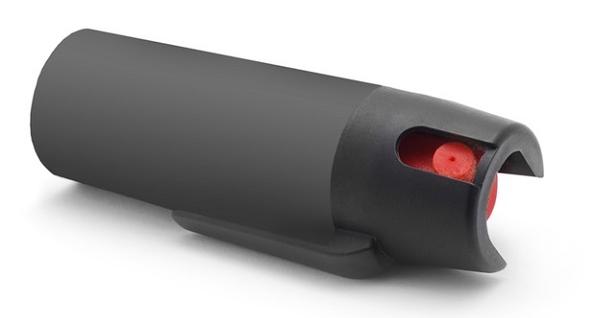 Have you ever thought about what you might do if a criminal sprays you in the face with pepper spray? That scenario happened recently in New Jersey when a shoplifter sprayed two store security guards who confronted her after she stole some merchandise. The spray incapacitated the security guards and the woman escaped to a nearby hotel. When confronted by hotel security, she sprayed them as well. A criminal who will spray security guards will have no compunction about spraying you (his victim) as well. Read more about the incident at the link below:

It’s not common, but it still happens on occasion. You should have a plan in place in the event you are confronted by a criminal weilding a can of chemical spray.

Some of you will say “I’d just shoot him.” Not so fast. In general, using deadly force requires that a reasonable person be in fear of serious injury or death. It’s going to be tough to show that pepper spray was a lethal weapon used against you when almost every police department in the country places the use of pepper spray at the LOWEST level on the use of force continuum. In most police agencies, you are required to pepper spray a resisting subject (if feasible) before you even consider using strikes against him. Pepper spray sucks. I know. I’ve been exposed to it over 50 times in training and on the street. It causes a lot of pain and some temporary blindness, but it doesn’t cause serious injury.

The standard argument I get from the “I’d just shoot him” crowd is that if the victim is disabled by the pepper spray, the criminal could disarm the victim and shoot him with his own gun. It’s a roundabout argument for justifying a deadly force response, but it doesn’t always work. In my opinion, if a criminal was using pepper spray and attempting to disarm his victim, it likely WOULD justify a lethal response. The problem is that the criminal actually has to be trying to take the gun for the victim to fear for his life. We need reasonable, articulable facts that would lead a person in a similar situation to believe that a disarming attempt was immanent. Mere possibility of an event happening isn’t enough evidence to keep you out of jail.

If you can’t shoot the bad guy, what can you do?

I think the first step to consider is retreating. Most small cans of chemical irritant have a very limited range. The small keychain type sprays only shoot about five feet. The larger canisters that cops carry shoot a stream that is 10-15 feet. Excepting the large fire extinguisher-style cans, you would be out of range of any commonly carried chemical spray if you could get at least 20 feet away.

If you can’t escape or shield, recognize that you are going to be sprayed. Know in advance how you will react. You can usually continue fighting, but some people panic when they are hit with the spray for the first time. Their panic leads to a freezing response that makes them unlikely to be able to defend themselves. The spray painful. It makes you cough and your eyes burn. But most of you can fight through the pain as long as you know what to expect.

You don’t want your first exposure to be on the street while you are fighting a criminal. It would be a great idea if you had someone spray you in a controlled situation first so that you aren’t shocked by the effects when you have to fight it on the street. If you don’t want to take a full spray to the face, spray some OC onto a gauze pad and wipe the corner of your eye with it. You’ll get a good taste of what the spray feels like and still be able to decontaminate relatively quickly.

A very small percentage of people are allergic to red peppers and will have a serious allergic reaction if exposed to OC spray. If you feel your face and throat swelling, get hives, or have serious difficulty breathing after exposure, seek medical help! That’s another reason I advocate an advance exposure to OC. You don’t want to find out that you have a potentially fatal allergy while you are fighting the bad guy!

If none of these are available, you’ll have to flush your eyes the natural way, by blinking rapidly. Close your eyes as hard as possible, open them quickly and repeat until the tears start flowing. It will be painful to open your eyes at first and you won’t want to do this, but I promise you’ll decontaminate more quickly.

If the criminal presses the attack after he sprays you, you will have to keep fighting no matter how badly you are exposed. Continue to blink and strobe your eyes as rapidly as possible. You may have to physically pry your eyelid open with your non dominant hand if you get a full exposure. Prying your eye open with the off hand will provide enough vision that you will be able to target your opponent or line up the sights on your weapon.

Most of you will think I’m crazy to advise spraying yourself, but I think it is a smart strategy, escpecially if you carry the spray yourself. Every time I’ve sprayed someone with pepper spray on the street, I’ve been exposed to it myself on some level. Every. Single. Time. If you plan to use it on a criminal, you’ll get a taste yourself. I promise. Knowing how to handle that will give you the confidence you need to win the fight against an attacker armed with a chemical irritant spray.