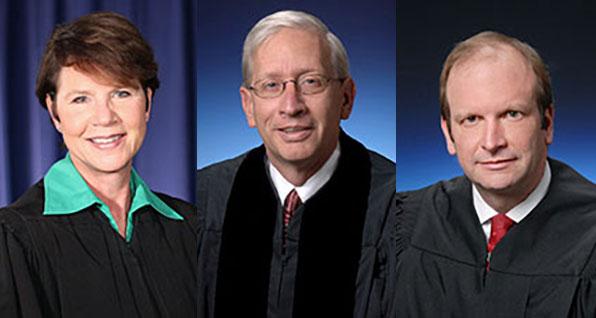 With a Chief Justice Kennedy, we are assured that our Constitutional rights will be protected and defended. She has stood strong against those who have attempted to shred our Constitution, and as head of the Ohio Supreme Court, we all can have peace of mind she will always do the right thing, as she has over the years as a former police officer, and as she did as a judge in Butler County.

BFA PAC is also pleased to announce endorsements for current sitting Justices Patrick Fischer and Patrick DeWine. Both Justices are vying to retain their current Supreme Court positions. They were first elected in 2017.

Justice Pat Fischer has a strong interest in ethics and professionalism, and he knows the importance of being able to see and listen to both sides of an issue. Knowing and understanding the law as he does, Justice Fischer is keenly aware of how important it is that the law be applied properly to the facts in each case. Previously, he served on the First District Court of Appeals.

Justice Pat DeWine is known for the quality and thoroughness of his legal opinions. His opinions reflect his strong belief in judicial restraint and his respect for the constitutional roles of the other coequal branches of government. Justice DeWine at one time served on the First District Court of Appeals and Hamilton County Common Please Court.

Each of these Justices has a strong record of upholding the law, which is what gun rights advocates need in a Justice. Honesty, integrity, and a duty to uphold the rule of law, to be fair and unbiased in their assessment of each case: these are the qualities of a good Justice and each of these candidates is worthy of our support.

None of our successes in the legislature matter if we don’t have Justices willing to uphold the law. Kennedy, Fischer and DeWine are excellent Justices who will rule on the law, not make law based on their personal whims. They all will uphold our Constitutional Rights. We've had many legislative successes in Ohio improving our Second Amendment Rights. These three Ohio Supreme Court Justices have repeatedly upheld those successes.

We encourage everyone to mention these endorsements to their friends and neighbors. Most people do not know who to vote for in judicial races and having the guidance of a friend who knows something about the candidates is valuable.

BFA PAC did the vetting. Our supporters will help spread the word. Together we will help Kennedy, Fischer, and DeWine win on November 8.

Click here to see all of our grades and endorsements for the 2022 Ohio General Election.

Linda Walker is President of Buckeye Firearms Association, Chairman of Buckeye Firearms Association PAC, a Member of the Board of Directors of the National Rifle Association, where she sits on the Legislative Policy, State & Local Affairs Subcommittee, and Grassroots Development committees. She’s an NRA-ILA FAL Frontlines Activist Leader, an NRA certified instructor, and the 2009 recipient of the NRA's "Sybil Ludington Women's Freedom Award.” She is Co-Founder and Co-Host of the NRA Women’s New Energy Breakfast. Linda Walker was also a Co-Chair of President Trump’s “Gun Owners for Trump” national advisory board, both in 2016 and 2020.