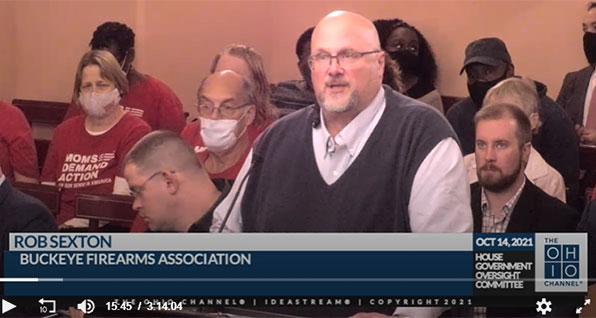 Buckeye Firearms Association (BFA) testified in support, along with John Weber for NRA-ILA and Chris Lee for the National Shooting Sports Foundation.

This is the most powerful and comprehensive bill of its kind ever introduced anywhere in the United States. BFA pioneered this bill in 2020 as many other states used their power during the COVID pandemic to shut down gun stores, stop the processing of carry licenses, and find endless ways to interfere with the exercise of basic Constitutional rights.

Along with the NRA and NSSF, we worked with Rep. Scott Wiggam in the House and Sen. Tim Schaffer in the Senate to craft language that would prevent potential infringements in Ohio across a broad range of firearm and sportsman activities.

Below is the text of our testimony. We have also discussed these bills on several Keep and Bear Radio podcasts.

Thank you, Chairman Wilkin, and members of the House Government Oversight Committee for the opportunity to speak in favor of House Bill 325. I am Rob Sexton, Legislative Affairs Director of Buckeye Firearms Association. BFA protects the rights of Ohio’s 4 million gun owners, and that is what brings me here today in support of this legislation.

We greatly appreciate Representative Wiggam’s willingness to sponsor this bill, which is a top priority of our organization. HB 325 is a simple bill. It states that the state of Ohio and all of its local government entities are prohibited from infringing on our constitutional rights regarding firearms under the guise of any type of emergency.

The day after HB 325 was introduced, the Columbus Dispatch and Cincinnati Enquirer posed a simple question. And one that I would like to think all legislators consider when any bill is introduced. “Is it necessary?”

The article went on to point out that Ohio currently has a very pro-gun rights minded legislature and that Ohio Governor Mike DeWine did not infringe upon the rights of gun owners during his response to the COVID 19 crisis. So the article raised the fair question…is it necessary?

I’ll begin by pointing out that over the last year and a half, businesses, access to recreational facilities, even extended family gatherings were all shut down under the declaration of an emergency. I am 54 years old. 2020 was the first time I missed a major holiday with my parents and extended family. I am blessed to still have my folks. We don’t miss holidays together in my family. We’ve been equally blessed to all be within a couple of hours from each other. So I’d never missed hosting my parents at Christmas time or traveling to my hometown of Dayton where my folks have hosted us for both Easter Sunday and Thanksgiving every year that I have been alive.

It wasn’t just holidays that were affected, though. Nearly all of us worked from home, schools closed, travel came to a screeching halt, and restaurants closed, some permanently. Basically, the whole country shut down, most of it due to emergency declarations, others on a more voluntary basis. At some point among all of the worry about the survival of my business and my family, it occurred to me. Government has a tremendous amount of power. And in my lifetime, I’ve never seen it exercised in such a sweeping fashion.

But like the newspaper pointed out, it mostly didn’t affect gun owners or gun stores here in Ohio. For that matter, by way of comparison, the orders didn’t affect churches in Ohio either. So why do I reference churches in testimony on a bill that is specifically about firearms? What makes these two items special? The First and Second Amendments to the United States Constitution, of course. And Article 1 Sections 4 and 7 of the Ohio Constitution, in an even stronger fashion. I am proud that Ohio’s government did not follow some of the terrible examples of government overstep and outright abuse we saw in other states. Churches being fined in California and outright threatened in New York City. And gun stores being shut down in 7 states, including one right on our northern border. I have to admit the churches shocked me more than Michigan. I never thought I’d see the day when governors were threatening churches. But I was very shocked to see Michigan, a state jam packed with nearly a million sportsmen having their access to purchase a firearm eliminated with the simple stroke of an executive pen. No hearings. No debates. No process. Just a signature eliminated constitutionally protected rights.

During this time, BFA leadership discussed the history lesson of Hurricane Katrina, when New Orleans authorities confiscated firearms without cause, and how there in Louisiana and across the country, states enacted laws to define the limits of what government can do during an emergency. That effort has continued since 2005 after that terrible disaster, and it has once again picked up steam during the current COVID crisis. 24 states to date have spelled out these protections. It is BFA’s intention to see Ohio become the 25th.

With such strong constitutional protections both state and federal, why is this law necessary? It doesn’t get more clear than “the right of the people to keep and bear arms, shall not be infringed.” Or Ohio’s version, which reads, “The people have the right to bear arms for their defense and security.” Why do we need more than that? One major reason is because courts have the right to rule over disputes about government overreach, and over this past year and a half we saw courts rule that churches must comply with government orders to close. So courts decided that during a time of a declared emergency, a governor had the right to override constitutionally protected rights of worship, and that government had a right to limit access to firearms during an emergency.

Now we didn’t have those problems here, so the question is once again apparent. Why is this bill necessary? Well that is simple. It is necessary because things change. I never thought I’d see a day when rugged New Mexico was banning forms of hunting, but that has begun to happen. I’ve been shocked to watch Rocky Mountain Colorado enact gun restrictions in line with those in California and New York, but it has happened. Red states become blue. Blue states become red. Times change. And it would be foolish to wait to spell out in plain English that our rights to own, posses, transport, train, carry, and purchase firearms for our safety, recreation and food are not subject to restriction during a time of emergency.

It is apparent from the judicial decisions I referenced that courts need clarification from the legislature. Because there can be, during times of extreme circumstances, times when courts will have the opportunity to weigh whether to allow restrictions on constitutionally guaranteed rights. House Bill 325 makes it clear. Our right to protect our families by purchasing and owning firearms will not be infringed. Waiting until Ohio’s political behavior is less friendly toward gun owners simply means those protections will never be enacted. 24 states have made it crystal clear. Ohio should be next.