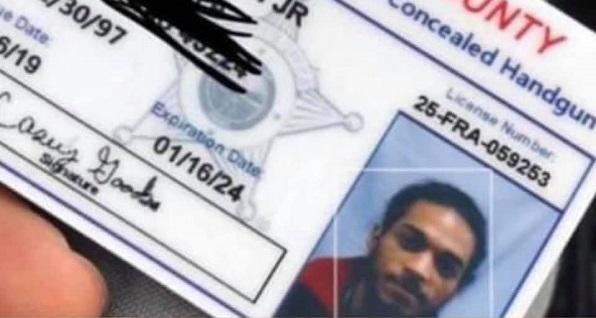 An autopsy report revealed Goodson was shot 5 times in the back and once in the buttocks as he returned from a dentist appointment and was entering his home.

The indictment, issued by a Franklin County grand jury, charges Meade, 43, with two counts of murder and one count of reckless homicide.

Saturday will mark the one-year anniversary of the shooting, which occurred on the 3900 block of Estates Place, where Goodson lived with his grandmother. It happened just after Meade wrapped up work with a U.S. Marshals Service fugitive task force in an unsuccessful search for a suspect in the area.

Very little information has been released by investigators about the shooting, for which there are no known eyewitnesses and no video. Meade was not wearing a body camera, a piece of equipment that Franklin County deputies did not and still don't have.

Hours after Meade's indictment, the Dispatch reports a federal civil rights lawsuit was filed on behalf of Goodson's estate by his family in U.S. District Court in Columbus. The lawsuit names Meade and Franklin County as defendants.

Meade and Goodson's family have offered extremely different accounts of what led to the shooting. What is known is that Meade was heading back to his office in an unmarked vehicle belonging to the Marshals Service when he encountered Goodson, and was likely wearing plain clothes as well.

There were many missteps in the initial investigation into this shooting, beginning with Peter Tobin, the U.S. Marshal for the Southern District of Ohio, declaring that the shooting was justified before any investigation had been done. Tobin later admitted that statement was "premature" and "based on insufficient information."

Another misstep occurred when Columbus police failed to request that the Ohio Bureau of Criminal Investigation take the lead on the investigation until three days after the shooting, an error which resulted in BCI to decline the request. This seems to have occurred because of a disagreement between the U.S. Marshal's office and the Franklin County Sheriff's department as to whose purview Meade was acting under at the time of the shooting. Twelve days after the Goodson's death it was revealed that Columbus police investigators had still not met with Meade.

Eventually, the Franklin County, Ohio, Prosecuting Attorney's office appointed two special prosecutors to assist in its investigation and potential prosecution of the case.

As I have stated repeatedly since the shooting occurred, "it is best to withhold judgment until all the facts come in. But I hope that all concealed handgun license-holders will agree that this situation is very concerning."

Both sides will now have the opportunity to present their facts to a jury.