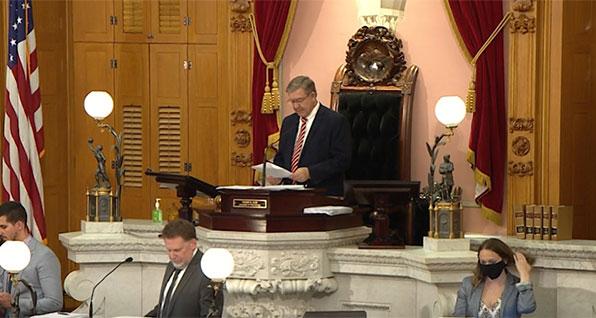 How the Ohio Duty to Retreat Repeal Bill Became Law

On January 4, 2021, Governor Mike DeWine signed Senate Bill 175, which included the repeal of Ohio’s unjust law that requires victims of violent crime to retreat before being able to defend themselves. The newly signed law will become effective on April 6.

How this came to be is a story of the experience and effectiveness of Buckeye Firearms Association (BFA) and the National Rifle Association (NRA), and a testament to the importance of building strong working relationships with elected officials over many years.

In the Fall of 2020, conversations with key legislators clearly revealed that the General Assembly was not going to pass previously approved versions of a duty to retreat bill. Because the issue was a top priority, however, BFA began discussing a redraft to create a clean version of the bill with Senator Terry Johnson and now former Senate President Larry Obhof. As a result, Senator Johnson introduced Senate Bill 383. Over in the House, State Representative Kyle Koehler introduced an identical companion bill, House Bill 796.

The calendar presented the biggest challenge. With the days rapidly dwindling at the end of the two-year legislative session, and the hopes of moving new bills becoming less likely each day, BFA worked with Statehouse leadership to add the language for repealing duty to retreat to another bill that was already advancing through the legislative process. Along with the NRA, BFA stayed in continual communication with the senior staff of both Senate President Obhof and Speaker Cupp, looking for an opportunity to do just that. We also regularly communicated on this strategy with Speaker Pro Tempore Tim Ginter, Representative Scott Wiggam, and Senators Terry Johnson and Tim Schaffer.

Agreement was finally reached with the House to add a repeal of duty to retreat to Senator Schaffer’s Senate Bill 175, which had already passed the Senate. The bill provided immunity for non-profits when a shooting takes place on their premises. With this strategy in place, BFA and the NRA reached out to their vast supporter base to generate tens of thousands of calls and emails from gun rights activists across Ohio.

Throughout those final days of session, BFA and NRA worked relentlessly to shore up key votes and keep the bill on the tight schedule required to pass during the chaotic lame duck session. Both Senate President Obhof and Speaker Cupp were true to their word. Late on December 17, the House approved the amendment to Senate Bill 175, and the full bill was passed 52-31. The following evening the Senate did its part and agreed to the House changes by a vote of 18-11, sending the bill to Governor Mike DeWine.

Speculation ran high after the vote that the Governor would veto the bill. He had previously communicated that he wanted to see changes in gun laws in response to the Dayton murders before he would consider signing any gun rights bills. Once SB 175 was on its way to the Governor, however, BFA and NRA kicked their efforts into high gear.

In addition to normal grassroots activation of calls and emails to the Governor, the groups and their allies continued to communicate directly with both Governor DeWine and Lt. Governor John Husted, discussing the issue with them, and reminding them both of the promises made back in 2018 that as Governor, Mike DeWine would sign a duty to retreat bill.

Ultimately, Governor DeWine kept his promise to Ohio’s 4 million gun owners and signed Senate Bill 175 on the last day it was on his desk, January 4.

This is a great way to kick off the new year and a new legislative session. We look forward to continuing our fight for Second Amendment rights in the Buckeye state.