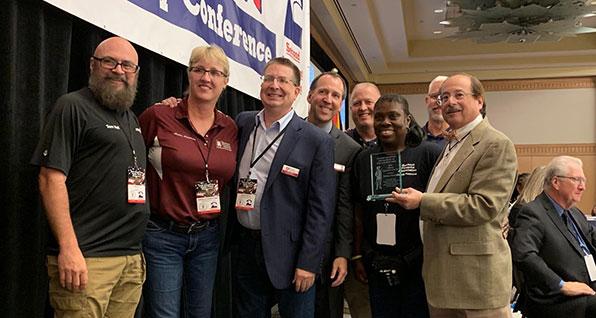 During the 2019 Gun Rights Policy Conference, September 21-22, Second Amendment Foundation Founder Alan Gottleib presented Buckeye Firearms Association (BFA) leaders with the Citizens Committee for the Right to Keep and Bear Arms 2019 Affiliated Organization of the Year Award "in recognition of the tireless hard work and dedication to the preservation of the individual right to keep and bear arms by its members."

Standing in front of an overflow crowd of more than 1,000 gun rights activists who had gathered in Phoenix, AZ, Gottleib praised BFA for going above and beyond in their efforts to fight for Second Amendment rights in Ohio and frequently in other states around the U.S.

Buckeye Firearms Association serves as the flagship of a massive grassroots effort to defend and advance the right of more than 4 million Ohio citizens to own and use firearms for all legal activities, including self-defense, hunting, competition, and recreation. BFA works to pass pro-gun legislation, educate the public through ongoing media relations, provide high-quality firearm classes, and make available a wide variety of resources for gun owners.

Buckeye Firearms Foundation is a 501(c)(3) charitable organization that seeks to extend BFA's core mission through youth shooting programs; grants for worthy organizations, young competitors, and sporting and hunting programs; and education, including our cutting-edge FASTER Saves Lives Program that has spent well over a million dollars training teachers and staff to stop lethal threats at school and provide life-saving trauma care.

In addition, the Foundation funds legal defense to defend gun owners against infringement of rights and litigation to force local governments and other entities to comply with Ohio gun laws. The most recent addition to the Foundation is the Ken Hanson Constitutional Law Scholarship to support young law students who wish to focus on Constitutional Law, especially in matters of the Second Amendment.

Buckeye Firearms Association PAC seeks to empower voters by grading, endorsing, and supporting candidates on the city, county, and state level, including mayors, sheriffs, legislators, governor, and other races. The Endorsement Committee grades candidates based exclusively on their support for gun rights and issues endorsements for those who have demonstrated this support through votes and real-world action on behalf of gun owners. These grades and endorsements are summarized in the Ohio Pro-Gun Voter Guide.

Buckeye Firearms Association is humbled by the professional recognition they have received over the years and sees each award as a challenge to continue fighting for the rights of law-abiding gun owners. Here are some of the other awards and honors presented to BFA and its leaders: