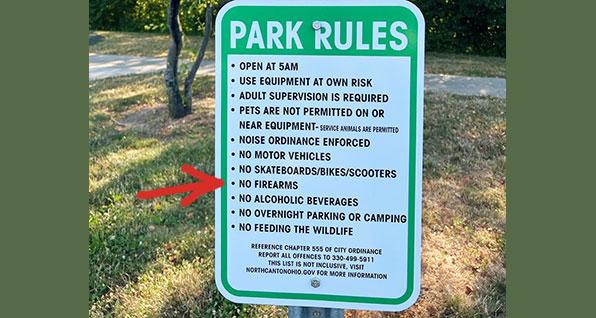 Ohio cities cannot ban guns in public parks. That's been the rule for nearly two decades ever since concealed carry became legal in the state.

In fact, the Supreme Court of Ohio has ruled that cities cannot ban firearms in municipal parks because it conflicts with a general state law that permits qualifying adults to carry a concealed weapon on any public property other than at locations enumerated in the law.

Yet, communities continue to put up no-gun signs, whether out of ignorance or obstinance. Fortunately, there are many examples of these signs being removed.

Recently, it happened again. North Canton put up signs in Price Park that included a prohibition of firearms. Russell H., a North Canton resident, noticed the sign and complained to the Police Chief. Shortly afterward, the signs came down.

Here is the email exchange I had with Russell.

Received a call this morning from Russell H who sent this. This sign was just recently posted at Price Park in North Canton.

(Photo at top of article was attached to email.)

The city cannot prohibit firearms in a public park. This has been the case for nearly 20 years, so they should know better.

Do you wish to pursue this with the city? I can provide some information to share with the city attorney, who is generally the best person to start with.

Here's an example of how this played out in another city. Sometimes it's a lot easier. Most places just need to be informed and they'll make the change within a few months.
https://www.buckeyefirearms.org/university-heights-finally-removes-no-gu...

I did talk to police chief Stephan B Wilder of North Canton. He said the signs were just put up and can’t just put tape over NO FIREARMS. Just said it would take time to change signs in all there parks. He also said that it was added in park rules so that people would not target shoot or hunt in city park. THAT IS SO FUNNY!

I will keep an eye on this since I use this park a lot. Of course they have more parks with the same rules. Thank you.

If they never change this I will contact BFA again.

Let's get on the phone and discuss how to proceed. I've updated some information you can use to present to North Canton officials. But it will be easier to discuss on a call than by email.

Is there a time that's good for you?

Sorry I didn’t get back to you sooner but I had to make sure what I saw. Evidently they removed the signs. I had to double check.

If you would still like to call you are more then welcome to. You can call anytime afternoon. I listen to your podcast. Thank you for doing them.

This may be the fastest any no-gun sign has ever been removed. And I'm guessing that the "no firearms" rule was just a mistake by whoever created the sign, based on North Canton's municipal law 555.2 (e):

Firearms and Hunting. No person shall use firearms or bow and arrows for hunting and/or target practice in any of the parks of the City.

I've worked with several individuals over recent years to get no-gun signs removed and municipal laws changed in their communities, and most of the time, all it takes is clearly communicating state law to the local Law Director, City Council, or Mayor. It can take a few months to see any action taken, especially when a municipality has to update their legal code. But it happens eventually.

The key is to be courteous but persistent in showing that a municipality is violating statewide "preemption," which clearly states that only the State of Ohio may regulate firearms, their components, ammunition, or knives. Some local officials won't like it when you challenge them, but most don't want to embroil their community in a lawsuit they are guaranteed to lose.

The governing law is spelled out in Ohio Revised Code 9.68. The version I'm linking to goes into effect on Sept. 18, 2022, adding knives to the list of items that political subdivisions may not regulate, thanks to the passage of BFA-supported SB 156, a bill sponsored by Senator Kristina Roegner.

Given that there are nearly 2,300 cities, villages, and townships in Ohio, it is impossible for BFA to police the entire state on illegal no-gun signs and ordinances. However, we can help if you see a violation and want to do something about it. Use our contact form to let us know. Take a photo of the sign or cite the ordinance in question. We'll give you clear guidance on the steps to take, who to talk to in your community, and documents you can share with them.

Our elected officials expect us to comply with the law. We have every right to expect the same of them.